"We present the largest cohort of KBG syndrome cases confirmed by ANKRD11 variants reported so far, consisting of 20 patients from 13 families. Sixteen patients were molecularly diagnosed by Sanger sequencing of ANKRD11, one familial case and three sporadic patients were diagnosed through whole-exome sequencing and one patient was identified through genomewide array analysis. All patients were evaluated by a clinical geneticist. Detailed orofacial phenotyping, including orthodontic evaluation, intra-oral photographs and orthopantomograms, was performed in 10 patients and revealed besides the hallmark feature of macrodontia of central upper incisors, several additional dental anomalies as oligodontia, talon cusps and macrodontia of other teeth. Three-dimensional (3D) stereophotogrammetry was performed in 14 patients and 3D analysis of patients compared with controls showed consistent facial dysmorphisms comprising a bulbous nasal tip, upturned nose with a broad base and a round or triangular face. Many patients exhibited neurobehavioural problems, such as autism spectrum disorder or hyperactivity. One-third of patients presented with (conductive) hearing loss. Congenital heart defects, velopharyngeal insufficiency and hip anomalies were less frequent. On the basis of our observations, we recommend cardiac assessment in children and regular hearing tests in all individuals with a molecular diagnosis of KBG syndrome. As ANKRD11 is a relatively common gene in which sequence variants have been identified in individuals with neurodevelopmental disorders, it seems an important contributor to the aetiology of both sporadic and familial cases."

ANKRD11, why have you foresaken me?

3 families with similar traits are examined for possible syndrome 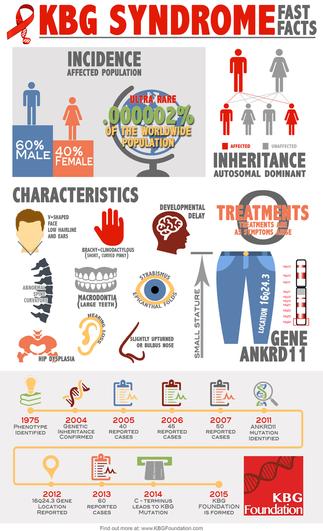 The name KBG Syndrome is derived from Dr. Optiz's tradition of using the surname initials of the families first diagnosed.  No, it is not a dyslexic russian spy syndrome, it is a syndrome tied to global cognitive delays, craniofacial anomalies and a variety of skeletal challenges.

In 2013 "Neurobehavioral phenotype observed in KBG syndrome caused by ANKRD11 mutations" by Lo-Castro, Brancati, Digilio, Garaci, Bollero, Alfieri, Curatolo began to define the neurological features of KBG Syndrome, which had not been delineated. They reported on 2 individuals diagnosed with KBG that presented with "intellectual disabilities, severe impairment in communication skills, deficits in several aspects of executive functions and working memory and anxious traits."

Also in 2013, a Chinese Patient with KBG Syndrome was found to have the ANKRD11 mutation at 16q24.3 AND showed additional characteristics not associated with KBG. In the paper "A Chinese patient with KBG syndrome and a 9q31.2-33.1 microdeletion" researchers Xu, Zhou, Yong, Cong, Li, Yu, Qi also found the de novo microdeletion of 9q31.2-q33.1. They concluded that most of the characteristics of the patients were defined by the combination of these two findings and "The case demonstrates well the need for comparing an abnormal genotype with a detailed phenotype analysis and the need for further studies in case the phenotype is unusual for the genotype."

2013 was a banner year for further defining KBG Syndrome, it had been almost 2 years since the mutation in ANKRD11 was found and researchers were looking more closely at individuals with this mutation and their presentations to add to the phenotype and diagnostic criteria. Doctors Miyatake, Murakami, Okamoto, Sakamoto, Miyake, Saitsu, Matsumoto. delved down into "the clinical entities of KBG Syndrome and 16q24.3 microdeletion syndrome from a clinical and genetic point of view" in their paper: "A de novo deletion at 16q24.3 involving ANKRD11 in a Japanese patient with KBG syndrome".

The research article "Partial deletion of ANKRD11 results in the KBG phenotype distinct from the 16q24.3 microdeletion syndrome" by Khalifa, Stein, Grau, Nelson, Meck, Aradhya, Duby adds additional support to location 16q24.3 being the deletion/duplication causing KBG Syndrome and additional papers through the next 2 years point to a variety of conditions and mutations having an association with a KBG diagnosis. These include an overlap with SIlver-Russel Syndrome which also presents with similar traits and a microdeletion at location 16q24.3. Deletions in 22q11 may also be tied to KBG. A rare case of a individual with Kabuki Syndrome having a deletion in exon 11 of ANKRD11 and mutation of KDM1A presenting with similar traits and additional presentations, both of these combined led to his phenotype. Researchers also discovered CdLS and CdLS-like phenotype overlapping mutations with KBG Syndrome.

In 2015,  32 individuals with a genetically confirmed diagnosis of KBG Syndrome were examined for height relating to KBG syndrome and how to address it. In the paper "Short Stature in KBG Syndrome: First Responses to Growth Hormone Treatment", Reynaert, Ockeloen, Sävendahl, Beckers, Devriendt, Kleefstra, Carels, Grigelioniene, Nordgren, Francois, de Zegher, Casteels detail the results seen with the introduction of growth hormone concluding that KBG rarely catch up and the addition of this treatment is promising.

The latest body of research on KBG Syndrome provides us with limited EEG findings (while 50% of KBG patients show electrical anomalies in brain function not all have seizures), 3D stereophotogrammetry gives us more in depth analysis on the craniofacial features of KBG and more detailed dental findings.

When there is no definitive aetiology for a condition, all diagnosis are actually an extremely educated guess based on the known pathology, but until the smoking gun is found, it still remains subjective. The smoking gun for KBG Syndrome was found in 2011 and detailed in the paper "Mutations in ANKRD11 cause KBG syndrome, characterized by intellectual disability, skeletal malformations, and macrodontia." by Sirmaci, Spiliopoulos Brancati, Powell, Duman, Abrams, Bademci, Agolini, Guo, Konuk, Kavaz, Blanton, Digilio, Dallapiccola, Young, Zuchner, and Tekin. This breakthrough paper definitively identified that "mutations in the ANKRD11 gene encoding ankyrin repeat domain 11, also known as ankyrin repeat-containing cofactor 1" is the cause of KBG syndrome. Using a family with 3 affected members, the researchers were able to isolate and then compare their findings with other individuals diagnosed with the condition. They found that most of the mutations were identical with less affected individuals having slightly different mutations but they ALL carried a mutation in ANKRD11.

In 2012, researchers, Sacharow, Li, Fan and Tekin, used the ANKRD11 finding to further delineate KBG Syndrome and in their paper "Familial 16q24.3 microdeletion involving ANKRD11 causes a KBG-like syndrome", they reported that the family used for testing purposes met the suggested diagnostic criteria for KBG but they stopped short (no pun intended) of declaring it a KBG related finding calling it 'similar'.

Download your copy of the What is KBG Syndrome? Brochure.

KBG Syndrome is caused by a mutation in the ANKRD11 gene at location 16q.24.3 (maybe more) which creates a shortening of a scaffolding protein in that region. This short protein may be completely ineffectual or may be somewhat functioning which contributes to the variety and severity of the symptoms. Nearly all patients present with large upper front teeth, bushy eyebrows and triangular faces. The 'KBG appearance' is quite distinctive and is usually the first noticeable trait along with developmental delay and other bone anomalies.  For no known reason, males seem to be more affected than females. Treatment is determined on a case by case basis as symptoms arise. There is no cure, only management. The more patients are identified, the more likely a cure will be found. 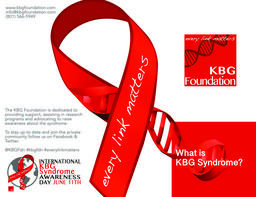 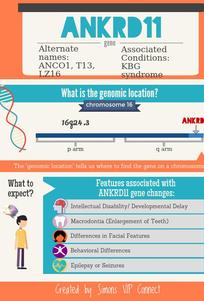 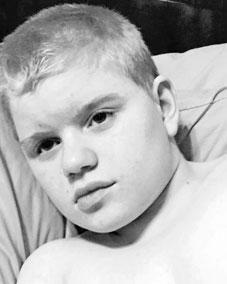 WHAT is KBG Syndrome?

KBG syndrome is a rare autsomal dominant condition that is present at birth. What does that mean? It means that if one parent has it, chances are 50/50 of any offspring also having the condition. It's the old coin flip. Heads you have it...tails you don't. Over 400 people worlwide have been diangosed with this condition and many more are being diagnosed each year.

In 1975 Doctors Herrmann, Pallister, Tiddy and Opitz began researching the phenotype that would lead to KBG Syndrome. They found 3 families that presented with similar characteristics including  "short stature, characteristic facies, mental retardation, macrodontia and skeletalanomalies". It was speculated, at that time by investigating the family histories, that this was an inherited syndrome. They concluded that it was, most likely, autosomal dominant. The syndrome was termed KBG using Dr. Opitz's penchant for naming syndromes based on the surnames of the primary patients used to define the condition. They published "The KBG syndrome-a syndrome of short stature, characteristic facies, mental retardation, macrodontia and skeletalanomalies" in November of 1975 and KBG was officially recognized by the medical community.

In 1977 and 1984 several researchers identified pathology that closely matched the description of KBG Syndrome and more and more traits were added to the description. It wasn't until 2004 that autosomal dominance was confirmed in a Turkish family by Doctors Tekin, Kavaz, Berberoğlu, Fitoz, Ekim, Ocal and Akar. In their paper, The KBG syndrome: confirmation of autosomal dominant inheritance and further delineation of the phenotype the researchers stated that "Large upper central incisors were the diagnostic finding in all three patients along with mental retardation, cryptorchidism, skeletal abnormalities, and short stature". Also in 2004 Doctors Maegawa, Leite, Felix, da Silveira HL and da Silveira HE noted additional traits and stated that " There is a wide clinical variability in the expression of this syndrome. The males are usually more severely affected then the females, suggesting possible X-linked inheritance in some cases."

By the end of 2004, 29 individuals had been identified with KBG Syndrome and many more would soon be diagnosed as diagnostic criteria had been recently identified. In the paper "KBG syndrome in a cohort of Italian patients." Doctors Brancati, D'Avanzo, Digilio, Sarkozy, Biondi, De Brasi, Mingarelli, and Dallapiccola introduced 8 new Italian patients and began analyzing EEG patterns finding anomalies with or without seizures and also finding mixed hearing loss, palatal anomalies with secondary speech disorder, distinct age-related behavior along with other possible characteristics.  Less common manifestations were posterior fossa malformations, eye defects, and congenital heart defects.

In the 2006 paper " KBG syndrome." by Brancati, Sarkozy, and Dallapiccola the Doctors more clearly define the characteristics and point out that aetiology is still unknown in the now 45 patients identified with the syndrome.

From 2006 - 2010 several case reports were published in an international array of patients with a variety of symptoms, some severe, others less noticeable and added the diagnostic criteria of Autism.

In late 2010, Doctors Almandey, Anthonappa, King, Fung published "KBG syndrome: clinical features and specific dental findings." and listed that "of the 54 Cases, including the present case, 36 (67%) were males. Mental retardations or global developmental delay was reported in 42 (78%) cases while 46 (85%) exhibited shortness of stature. Oral features occurred in 53 (98%) cases; macrodontia was present in 49 (96%) cases." 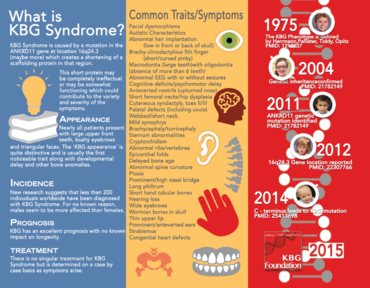