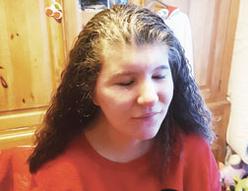 Born at 36 weeks weighing 3lb 6oz. I needed help with my

breathing so was put on a ventilator.  I was quite poorly and

needed antibiotics after my tummy swelled up.  When I was

3 days old doctors discovered I had a heart murmur. After

about 1 week on the ventilator I had gained enough strength

to be able to breath on my own. I was in special care baby

unit for about 6 weeks before I could go home.  During which

time I needed a blood transfusion.  I was monitored closely as I was born early and doctors soon realised I wasn't meeting my milestones.  By the time I was 3 months old my heart murmur had cleared up on its own.  I found it difficult to eat food when it was offered to me,  I would choke a lot and couldn't really chew properly.  I found it difficult to make my feelings known as I couldn't talk for a long time and I would get frustrated and have a lot of meltdowns.

I started mainstream school with the other kids my age but the teachers soon said I couldn't keep up.  I was given an Iep and then I was assessed for a statement.  By the time I was in year 3 the school could no longer accommodate my needs so I had to move to a special school.  My new school was brill.  I had so much fun while I was learning new things.  There was a lot more teachers to help when I was struggling and they seemed to know more about my needs.  By this time I had diagnosis of global developmental delay.  Adhd.  Left sided ptosis. I had many other characteristics such as short stature.  Curved and webbed fingers and toes.  Wide bridged nose.  Macrodontia.  Glue ear.  Thin upper lip.  Triangular shaped face low hairline.  I also developed Raynaud's Syndrome and suffered from painful joints.  I spent half of my time in a wheelchair as I found it really difficult and painful to walk.  I had support from our local special needs support group which is fun.

The doctors said they didn't really know what caused all my issues but they could do some genetic testing to see if the results showed anything.  My blood was taken to be tested and entered into the DDD study.  We didn't really think about it for years and the one day in December 2013 my mum revived a letter from the genetics service inviting us to an appointment in January 2014.

At the appointment the doctor told us they had found a genetic mutation in the ANKRD11 gene.  And this condition was known as KBG Syndrome. I didn't really understand and just wanted to play but mum was a bit surprised.  She said everything started to make sense and the information the doctor gave us sounded just like they were describing me.  Luckily I don't have any heart problems now and have not really had any problems with epilepsy. I do still have learning difficulties and don't always understand what people are saying to me but I am happy. I would love to work with children or be a cook when I grow up so that is what I am working towards at school.

We were unable to upload your file. Please ensure your file is 10MB or smaller in size.
View on Mobile