Rowan was born in 2015 after an uneventful pregnancy and

Looking back, his development was delayed as an infant.

At the time, we thought it was a normal variation.
He was born with a large anterior fontanelle, neck pits

(branchial cleft fistula), and later found to have bilateral

hydronephrosis. None of this was bothering him. He was on the small side but growing along the growth curve. He was in daycare and seemed to be doing well.

That all changed at 10.5 months, when he had 'spasms'. A trip to the ER followed by hospital admission, diagnosed Rowan with Infantile spasms, a rare, catastrophic form of epilepsy. Initially hopeful that Rowan could be cured, we started early and aggressive treatment. We searched for a cause. MRI, lab work, lumbar puncture, and initial genetic testing were all normal.

Rowan was not responding well to first or second line treatment for infantile spasms/epilepsy. He began regressing in development down to the newborn stage.

Whole exome sequencing returned a result of KBG syndrome. This initially sounded like good news as his neurologist had prepared us for a genetic condition with a worse prognosis. From what I could gather, kids with KBG had developmental delays, but did develop and seemed happy. Epilepsy from KBG was documented to be mild and easily treated. So why was Rowan so severely affected with difficult to control epilepsy? This is the frustrating part and I don't understand what his prognosis is.
As of 2017, he's 2 years old with uncontrolled infantile spasms. We have tried many medications. He gets lots of therapy weekly through early intervention. His development is around the 3 month range overall. He has a G-tube due to aspiration of liquids but he can eat soft solids.

He has a 4 year old neurotypical sister. He enjoys cuddling and swinging. We love him dearly and hope for a cure or successful treatment for seizures so that he has the opportunity to develop. 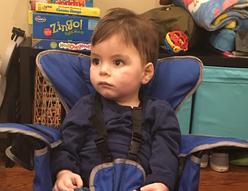 We were unable to upload your file. Please ensure your file is 10MB or smaller in size.
View on Mobile