Colin was slow to reach his milestones. But eventually made them. He was always in this grey area. There is concern but he gets there at some point. In my gut I have been waiting for that answer. I have always known there was something. Sitting was delayed. Walking was delayed. Speech is when we were able to get more support. He had a speech therapist at about 18 months. And some OT. The therapist thought he had apraxia. But like everything else,he eventually started talking 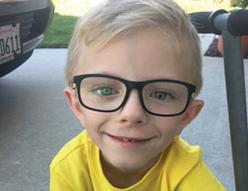 He is tiny for his age. Has never had much interest in food. We do the best we can. We are waiting for him to lose his front two teeth. His dentist doesn't see anything unusual in his X-rays. We shall see.

About a year ago his pediatrician at the time suggested genetic testing. Possibly give us some answers. Facial features,small stature. Small bent pinkies. Learning disabilities. This was what had her suggest testing. We were referred to CHLA.

On May 9,2017,we met and were told he has KBG syndrome. It is a name to what we already knew but still have so many unanswered questions. Also my husband 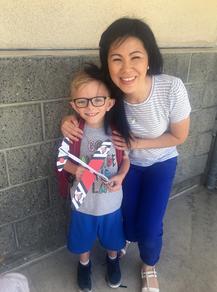 Colin is the 4th of my 5 children.

​My pregnancy was pretty normal. not unlike his brothers before him. That is, until my 20 week ultrasound. Because of the thickness of his neck, I was told he more than likely had Down's syndrome. I did end up having an amino and the results came back negative. 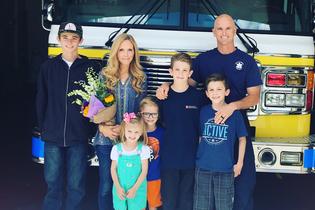 and I are not carriers.

Colin is loving. Caring. Sensitive. And just plain wonderful. He is our shining star. He's the bravest boy I know.  [❤] ️ Thank you for listening to his story.

It was a stressful time for us. I worried all the time about him. He was born via csection on December 16, 2009. Weighing 6 lbs. When I got my first look at him; he was so tiny! His facial features were a little different then my other boys: upturned nose, low set ears and small eyes compared to his head size. He also had a simian crease on both palms. I felt like the nurses were concerned about him but weren't telling me.

Late at night he made a newborn smile and opened his eyes. I noticed one eye's pupil was odd shaped. I'll be honest...it scared me.  The pediatrician on call said I must be seeing things. She had already checked his eyes. Turns out, he did end up having a mild coloboma in one eye.

Colin was jaundiced and a poor nurser. He couldn't hold a binkie. All my children are small and still are. But Colin really struggled to gain weight. He did have a teeny hole in his heart but that closed before his first birthday. His doctor had ordered him an MRI on his head because it was large compared to his body. Results: normal.

more. He does not have apraxia.

When he reached preschool age he was able to start a preschool class with extra intervention. He received speech and OT. This is where we saw his struggles. They are still his struggles today. He is however very social and loves school. He follows the rules and participates in class. He struggles with letter recognition and numbers. When entering kindergarten he was placed in the regular day class. He did ok for awhile. But mid year we moved him to the special education class. This was so hard on him but was best. He still would mainstream to the regular class but had much more one on one. I also must add he has had an IEP since he was preschool. Last year he continued in special ed and mainstreams for certain subjects. He will continue with special education.  Colin loves his friends and school.

Medically we have been fortunate. He is very hyper active. More so at home then at school. Some OCD traits. He seems to have tactical issues. Pretty mild but can be frustrating getting him out the door. Struggles with the feel of socks. Or shirts. Only will wear certain shorts.  He wears glasses and had surgery at age 5 because his eyes began to cross. Just today he had tubes put in his ears for constant fluid. Hopefully this helps his hearing. I will add hearing evaluations always are inconclusive; more then likely from fluid. We will retest soon.