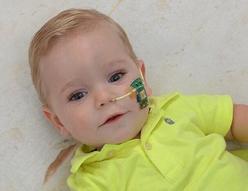 Upon going home the next 9 months were pretty uneventful. Cole was extremely slow to gain weight but he stayed on an upward trend in the <1%. The only other "difference" I saw in him as a baby than our other 2 kids is that he slept more and just acted like a newborn for a lot longer.

At his 6 month appointment I brought up to the doctor that he was not even close to being able to sit up yet. He suggested we give it some more time and check back in a month. A month later he still was not sitting up but was progressing so he said we will wait until he is 9 months to see how he is. At Cole's 9 month appointment he could sit if he was placed in a sitting position but could not get himself up on his own. Again, the doctor said he had came a long way and that it was still in the "normal" rage, just at the later end of it.

At 10 months (April 29th, 2016) I took a strong notice to Cole acting startled a lot. I had seen it before in him but this day I noticed it a lot. I thought maybe it was his vision. The next day I googled "when does a baby lose the startle reflex" and Google's answer was that if a baby startles past the age of 4-5 months old then it means they could have "severe neurological issues". Of course we all know google will tell you something as small as a paper cut is going to kill you. I didn't think anything major if it right away. About a week later I noticed the startling more frequently so I called the doctors' office. I told her what was going on, she said they could not get him in for the next 3 days and that I should take him to the ED. So, I picked up my oldest from school, took the 2 oldest home and headed to the hospital. When we got to the hospital they triaged us, the nurses saw him jerk twice and took us right to a room (didn't know to be happy that we didn't have to wait in the waiting room for 3 hours nervous that this could mean something major). The doctor came in, did not see him jerk and said aside from having some milestone delays and being really small that he looked healthy. He referred us to follow up with neurology and to sign up for in home physical therapy.

Once at the hospital Cole was settled and prepped (IV placed and fluids started) for testing to be done the next morning. Cole had an EEG and an MRI done. The doctor came in and said I should sit (of course this freaked me out). She said that Cole was being diagnosed with "benign myoclonic infantile epilepsy". Well, not so bad I thought! Definitely wasn't worth freaking me out by making me sit!
She made it sound VERY treatable and assured me that no damage was being don't during these events. She started him on keppra and we went home the next day.

Well, the meds seemed to work for a couple of days, Cole had went from having 22-ish seizures a day down to 5-8 and we also knew more time for the meds to build up in his blood would mean better results. A couple days after that I started seeing an increase in the seizures. I placed a call to the doctor's office and left a message for her assistant. The assistant called the next day, asked some questions and said she would get back to me once she talked to the doctor. Another day went by with seizures increasing, I called the office again, left a message with no response. By the 3rd day I decided to just take him into the ED again. We were back up to 22+ seizures a day again. They admitted Cole again and increased the keppra. After another day in the hospital and the seizures continuing to increase they had an epileptologist come in. They did another EEG, and added another medication. This continued on... At some point during his stay he was up to 85+ seizures a day. The epileptologist was coming in every morning and was in charge of Coles care at this point.

He took Cole off of one of the 2 meds he was on and added Depakote, we talked about the risks of this med in a child of his age and size but decided that the risk of letting him have this many seizures was higher. They did daily IV Depakote bolus doses along with his regular morning and night dose. They also did daily lab draws so we would know when it was at a therapeutic level. We then dropped the keppra and traded it for another med (onfi). The seizures were still up in the 80's. By the end of this 10 day stay we decided that the best thing would be to get genetics testing to see if we could pinpoint a reason for the seizures and to try putting Cole on a ketogenic diet (this has been known to help control seizures). It took a bit of time due to the fact that AZ only has 2 dietitians that are able to do the diet. We were super close to having to go to LA to be on the diet. Luckily one of them ended up being able to take Cole on as a patient. We got started on the diet and around day 5 Cole was just not himself. I called the dietitian and she said he would need to be checked out at the hospital. So, away we went for another 5 day stay. This stay was pretty eventful. Cole had metabolic acidosis from the diet (we were told that the diet is hard to start and that we might see a hospital stay, so this part wasn't a total surprise). After a couple of days Cole decided to stop drinking fluids. We were told by both of the ketogenic dietitians that they have many kids that need to have an NG tube placed to get nutrition but that it usually only lasts around 3 weeks and they start taking things by mouth again. So, we went with the NG tube. In July we got genetics testing back. That was when we got the diagnosis of KBG Syndrome. During research they found that other KBG kids have had seizures but only a small percent have daily seizure activity. This really did not help us in treating Cole but it gave us an answer as to why things were happening.
Fast forward to the last day of August, Cole had a G-Tube place because he STILL was not taking fluids by mouth and he was eating very little and was losing weight.

He had a swallow study done and was found to be aspirating on thin liquids.

By the first of November we weaned Cole off of the diet as it was not working and he was not tolerating it very well. He was in and out of the ED a lot and his cholesterol was through the roof. Oh, and I forgot to mention somewhere along the way we had taken him off of Depakote as his platelets were way off as were his liver levels. We just increased the onfi. At this point that is what was working best for him. If he would start to have an increase in seizures we would just up his dose.

In December they decided to to an endoscopy with biopsy due to his lack of interest in oral feeding. During the EGD they found a lump in his esophagus. The biopsy on that came back as an "inlet patch". Typically these come with no symptoms, are flush with the esophagus and are found by accident when looking for something else. Since Cole's formed a lump they decided it was best to remove it. At the beginning of March 2017 they went in by EGD again and cauterized it. We are hoping this will help his oral intake and his chronic chest congestion that he has. It has been about a month and so far we have seen very little to no difference in his eating and better chest congestion over the past week however it seems to be picking up again over the past 2 days. They will do another EGD in a month or so to check on things and see if they need to do anything else.

That is pretty much the low down on Cole.

Since this all started presenting itself Cole has been in physical therapy, gotten orthotics for his feet, seen a cardiologist and was diagnosed with a PFO, been to the allergist, the aerodigestive clinic, had tubes placed in ears, had hearing tests, lumbar puncture, 4 day EEG video monitoring, feeding therapy and a slew of things I'm sure I'm forgetting.

We were unable to upload your file. Please ensure your file is 10MB or smaller in size.
Thank you for contacting us! If needed, you will hear back within 48-72 hours.

Cole was diagnosed with KBG Syndrome in July 2016 when he was 11 months old.
​

Cole was born 17 days early (due to my high blood pressure). He was healthy and in the same weight range as our other 2 children. Cole has an amazing big brother (Cater) and sister (Cimbry) who would give him the world! He stayed the typical 24 hours after birth and .