Bastiaan was born in Netherlands on 25 October 2004.

During pregnancy a scan showed that Bastiaan was small,

leading to a hospital birth, which was not our first choice.

Bastiaan was born via C-section at 42 weeks. His birth

scores were good and he was just above the normal birth

weight. Because his lower jaw was relatively far inside, he

pacifier. We thought this was fine. The first year there seemed to be not much going on. Bastiaan grew well, cried little and seemed very satisfied.

With 1 ½ years Bastiaan was hospitalized with dehydration symptoms. Turns out he had 2 viruses. After a few days he was completely recovered. We then saw the rehabilitation physician and he found that Bastiaan motor skills were behind developmentally. He could not walk and also sitting up straight was tricky. Physical therapy was started.

Around 3 years his nursery school found that Bastiaan lagged very far behind compared to the rest of the kids. His speech was delayed and he also remained behind mentally. We worked with the rehabilitation doctor at looked into suitable education for Bastiaan. We initially chose Mytyl school, but that did not work out for him. In the end we opted for a medical day care center and he could start with them at 3 ½ years.

At 6 years old,  it was time for formal education. We were thinking again about the Mytyl school, but he turned out to be doing well and did not need their services, for now. The choice then fell on special education called rec3. Up to that point we had no diagnosis for Bastiaan.

Bastiaan finally had genetic research access and it was first thought he might have both Floating Harbor Syndrome and Cornelia de Lange Syndrome. Again, this turned out to be not it at all. In October 2012 Bastiaan got his first studies into the KBG syndrome which turned out the be the answer! We, then, were also tested for this syndrome, but tested negative.

In August 2014 Bastiaan was psychologically tested. He turned out to have ADHD and some measuring instruments clearly pointed into the direction of autism. Bastiaan is also vulnerable to ODD. He remains, at the moment, still under the care of his pediatrician. 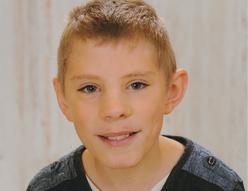